Lori S. Wyman, C.S.A., one of the most prominent Casting Directors in the Southeast, has been casting films, television shows, and commercials in South Florida since 1979.

Lori attended the University of Miami and she graduated with her Bachelor's Degree in Speech and Communications and her minor in Education. She recently received her Master's Degree from Nova Southeastern University (NSU) with a concentration in Drama Therapy. She pursued this degree in order to help actors with Audition Anxiety. Upon graduating with her undergraduate degree, she aggressively pursued a casting career and immediately started working for ACT I Talent Agency. At the time, ACT I was the biggest talent agency in the State of Florida.

Quickly building a reputation as one of the most outstanding talent agents in the business, she was asked by the company that was handling the Miami Vice casting if she would be one of their staff casting directors. While there, she worked on the Principal casting for “Miami Vice” during the 2nd and 3rd seasons. At the end of the 3rd season, she was approached by one of the producers of “Miami Vice” and asked to come work for them directly and head up their entire casting division. She did that for the duration of the series. When “Miami Vice” wrapped, she was immediately asked to head up the casting offices of the Burt Reynolds series, “BL Stryker” and to cast the Florida episodes of Stephen J. Cannell’s “21 Jumpstreet” and “Wiseguy.” After these 3 series, Lori decided to make the lucrative move to commercials and feature film casting.

In 1989 Lori was invited to become a member of the Casting Society of America, the professional organization of casting directors in the U.S. She opened her own offices in North Miami Beach in the spring of 1990. With her own studio space, offices and equipment, she was able to expand her business opportunities and provide a wider variety of services. Lori has also served on the Miami-Dade County Film, Print and Broadcast Advisory Board, helping to make decisions regarding the Film industry in Miami-Dade County. Lori is also a past vice-president of WOMPI, Women of the Motion Picture Industry, to whom she has contributed her casting services for many of their not-for-profit films that the organization produces for the good of the community.

Some of Lori's more recent casting credits are The Right Stuff for Nat Geo, The Assassination of Gianni Versace: American Crime Story for FX, HBO's Ballers, Bloodline for Netflix, USA's Burn Notice, The Glades and Graceland, and Starz's Magic City. Lori has also contributed her casting expertise to films such as Critical Thinking, Dolphin Tale, Dolphin Tale 2, Iron Man 3, War Dogs, FF2, and Fast 8. Lori Wyman is a 2-time Artios Award winner for the popular television thriller Bloodline and the critically acclaimed HBO movie, Recount. She is also an Emmy Nominee for Recount. 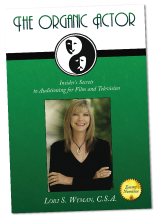 For more information about Lori, her workshops and speaking engagements, visit The Organic Actor.